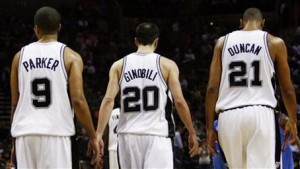 If you are regular reader of this blog, you know that I am a big sports fan. Baseball is my first love (go Rangers!), but I also greatly enjoy watching basketball.

Right now the NBA is in the midst of their playoffs and there is one team that stands tall above the rest: the San Antonio Spurs.

The Spurs have won their first 7 playoff games and are a great candidate to win their 5th championship. What’s interesting about the Spurs is that while they had the best regular season record and are undefeated in the post season, they don’t get a lot of attention from the media.

The reason is that they are considered “old” (some of their key players are supposedly past their prime) and “boring” (they are not making many YouTube videos about their flashy dunks).

When I think of this San Antonio Spurs team, it reminds me that when it comes to winning with money, usually old fashioned and boring also works very well. So, here are the 4 financial lessons from the “old” and “boring” Spurs:

One last thing: the Spurs do not care about their lack of attention or the criticism. They just go about their business because they know that their approach works.

When you look at your financial plan, if you are doing wise things with money, stick with it. Don’t listen to the critics.

I would take “old fashioned” and “boring” but winning, over flashy or fancy but broke and deeply in debt.

“The plans of the diligent lead surely to abundance, but everyone who is hasty comes only to poverty.”
Proverbs 21:5 (ESV)