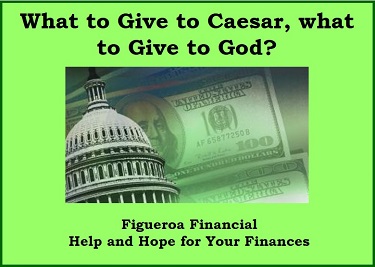 Recently I completed one of “favorite” tasks of any year: filing my annual tax return. I was prepared with all of my documents and I took care of it, even though I never, never enjoy the process.

An in spite of my problems with the U.S. Tax System, I know is a responsibility I could not avoid. Remember this passage in Matthew:

15 Then the Pharisees went and plotted together how they might trap Him in what He said.
16 And they *sent their disciples to Him, along with the Herodians, saying, “Teacher, we know that You are truthful and teach the way of God in truth, and defer to no one; for You are not partial to any.
17 Tell us then, what do You think? Is it lawful to give a poll-tax to Caesar, or not?”
18 But Jesus perceived their malice, and said, “Why are you testing Me, you hypocrites?
19 Show Me the coin used for the poll-tax.” And they brought Him a denarius.
20 And He *said to them, “Whose likeness and inscription is this?”
21 They *said to Him, “Caesar’s.” Then He *said to them, “Then render to Caesar the things that are Caesar’s; and to God the things that are God’s.”
22 And hearing this, they were amazed, and leaving Him, they went away.
Matthew 22:15-22

In His answer to the Pharisees, Jesus makes it very clear to us that paying taxes to the government (represented by Caesar in this case) is something we should do. Paul in his letter to the Romans tells us the same thing:

6 For because of this you also pay taxes, for rulers are servants of God, devoting themselves to this very thing.
7 Render to all what is due them: tax to whom tax is due; custom to whom custom; fear to whom fear; honor to whom honor.
Romans 13:6-7

However, I believe the issue goes deeper than a simple manner of a money exchange. Aside from paying taxes, what do owe the government? And what do we owe God?

As Christians, I think what we owe the government is very clear:

13 Submit yourselves for the Lord’s sake to every human institution, whether to a king as the one in authority,
14 or to governors as sent by him for the punishment of evildoers and the praise of those who do right.
15 For such is the will of God that by doing right you may silence the ignorance of foolish men.
16 Act as free men, and do not use your freedom as a covering for evil, but use it as bondslaves of God.
17 Honor all people, love the brotherhood, fear God, honor the king.
I Peter 2:13-17

Of course as Christians, our obedience to those laws should be limited to those laws that do not contradict God’s express will and His commandments.

Like the Apostles in the book of Acts (Acts 5:24-29) in the moment of persecution and oppression, we should be willing to obey God rather than men and we should already be willing to suffer the consequences.

So, what should we give God then? This is of course the most fundamental question and goes way beyond an issue of money.

As Christians, I believe we owe God:

So yes. Year after year, I will pay my taxes. I will give Caesar what is owed to Caesar.

However, for me the most important thing is to give God all that I owe to Him. He paid a debt that I could not ever pay by myself.

So the only thing left for me to do is to live every day doing what I can to advance His Kingdom. And to bring Him glory.

He has told you, O man, what is good; And what does the Lord require of you But to do justice, to love kindness, And to walk humbly with your God?
Micah 6:8