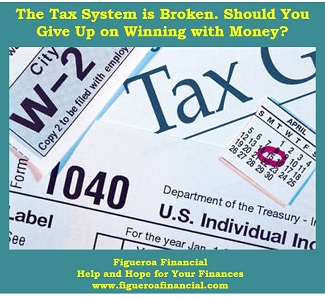 17 Tell us then, what do You think? Is it lawful to give a poll-tax to Caesar, or not?”
18 But Jesus perceived their malice, and said, “Why are you testing Me, you hypocrites?
19 Show Me the coin used for the poll-tax.” And they brought Him a denarius.
20 And He *said to them, “Whose likeness and inscription is this?”
21 They *said to Him, “Caesar’s.” Then He *said to them, “Then render to Caesar the things that are Caesar’s; and to God the things that are God’s.”
Matthew 22:17-21 (NASB)

Well, that’s finally done. I just finished filing my taxes for the past year. This is never an enjoyable experience for me. Every year I get stressed out and angry about having to deal with the U.S. tax code.

But as a Christian, I have no choice but to deal with it every year. The context for the passage at the top of this post is Jesus’s last week before going to the Cross (and I am writing this on Palm Sunday!).

For about 3 years, Jesus had been ministering in Israel and for that length of time the Jewish leaders sought to catch Him in an inconsistency or a blasphemy so they could find cause to eliminate Him.

The passage above brings us one of the last questions they used to challenge Him. They were trying to trap Him either as a traitor to the people (for supporting the tax system and Rome), or as an insurrectionist (seeking to challenge and overthrow the government by refusing to pay taxes.)

As usual, He was way ahead of them. He knew their hearts and evil intent. And He offered a marvelous response leaving all of us with a fundamental principle:

You have to deal with and pay your taxes regardless of what the government is doing with the money.

The Tax System is Broken

I believe the U.S. tax system is broken. For starters, it is way too complicated. There are too many rules and they change every year.

The average person needs a tax professional or specialized software to file their taxes. This is not only costly, but also requires an enormous amount of time and record keeping on everyone’s part.

Second, the system is broken because the government simply wastes most of the income they generate from the tax collection. I would not have such a big problem with paying taxes, if I knew the government was using the money wisely. Sadly, I know better.

Now, let me just say that I don’t have a problem with some amount of tax to go to the government. We do have common needs like infrastructure and defense.

I also don’t have a problem with programs that help those truly in need. There is a place for the government to step in and help.

But a complicated tax code and government waste are not my biggest concerns with the tax system.

My biggest concern with the tax system is that it does not encourage anyone to win with money.

The Tax System Penalizes Those Who Manage Money Well

The tax system is based on collecting income tax. So the more you win with money, the more you are taxed. The more you earn, the fewer tax deductions you have. Fair you say? Maybe.

But if you are working hard on managing your money well, on getting out of debt, on saving and investing for the future, you have a problem. The tax system penalizes you for doing well with money.

You end up paying more than your fair share of taxes. The system does not encourage you to prosper. It is designed to “help” those that are not doing as well with money.

With the “good intention” of helping out, the system encourages dependence on the government versus independence of living on your own financial strength.

It does not encourage hard work or entrepreneurship. It encourages just getting by and hoping someone catches your slack.

Should You Then Give Up on Winning with Money?

One temptation is that you just want to throw your hands up and give up. Just do enough so you don’t exceed some income threshold. You know, just don’t make too much money.

Another temptation is that you won’t want to report all of your income. That’s why sometimes many people just want to be paid in cash (i.e., no trace).

I recently spoke with a young entrepreneur who is working hard and doing well. Sometimes she gets tipped in cash and for a moment the temptation is there not to report anything. But she knows better. That would be cheating and stealing.

So yes, the tax system is broken. Should you then give up on winning with money?

No!!! One of the principles I like to emphasize as I write and as I coach people on personal finances is this: you have to be above average.

You have to excel in all that you do!!! So you go do what we know is right and proper:

Yes, I know the tax system is broken but that’s not keeping me from doing the right thing.

Jesus did not give me that option. And I must obey Him in all things.

Question: How do you deal with your tax situation?